The Chasm Between Early Adopters and Early Majority

Back in 1962, Everett Rogers introduced us to the Diffusion of Innovations that shows how people enter the market for any given idea, product or service. There are five groups of people who look at new ideas and products distinctively different. The percentages shown are consistent across the board in study after study. Here is a quick definition of these groups through the prism of the smart phone industry. 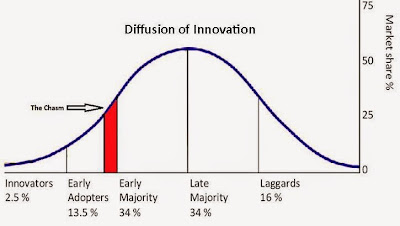 Innovators: They don’t find what they want on the market so they make it. They didn't get what they wanted from the new iPhone 5S so they hacked into the programming and made their own apps and programs.

Early Adopters: They want the newest, latest, most unique. They loved the iPhone 5S, couldn't wait to get their hands on it. Yet, there they were standing in line one year later for the iPhone 6+ because it was newer and more unique.

Early Majority: They want the new, too... but only after it has been proven to work. They prefer tried and true over new and unique. They bought the iPhone 5S, but three to six months after it launched and have proven itself. They’ll get an iPhone 6 eventually, but probably not until it is time to upgrade.

Late Majority: Unlike the Early Majority, these people are waiting until it feels like everyone has one. They will only buy the iPhone 5S because they found a great deal on it, and figured they might as well join the crowd.

Laggards: They aren't buying a smart phone. They don’t need one. Oh, they might get one, but only after all other options are completely gone. They will buy the iPhone 5S when they have no other choice.

WHAT THIS MEANS FOR MARKETING

The chasm you see in the chart is the monumental mind-shift that takes place between the Early Adopters (EA) and the Early Majority (EM).  The EA want their product now. They want “new and unique” and don’t care how much it costs. They’ll pay full retail to get it first. To them, the words “tried and true” are the kiss of death. The EM’s, however, live for the words “tried and true”. They want the proven item, the easily available item, the commodity.

If you try to market to the Late Majority (LM) or Laggards, you’re just a fool. The LM’s only want the commodity at a discount. The Laggards don’t want it at all and only buy it as a means of last resort at the cheapest price.

You can look at the five groups like this…


The profit margin, therefore, is in selling to the EA’s. The volume is in selling to the EM’s. Everyone else is a race to the bottom that you can’t  (don’t want to) win. The choice is yours, but it is definitely a choice you have to make. Otherwise you will be stuck in the chasm between the two with ineffective marketing to both of them.

PS One other thought I have been having on this topic... My toy and baby customers turn over so fast that even the tried and true product to me can often feel new and innovative and unique to a brand new mom-to-be. In other words, if you have a fast-changing market, don't throw out the tried-and-true products just yet. They may be new and unique to your new base.
Posted by Unknown at 4:46 PM