Would You Ever Admit You Weren't the Best?

Avis ran a whole ad campaign for several years based on the fact that they were NOT the number one company in their industry. 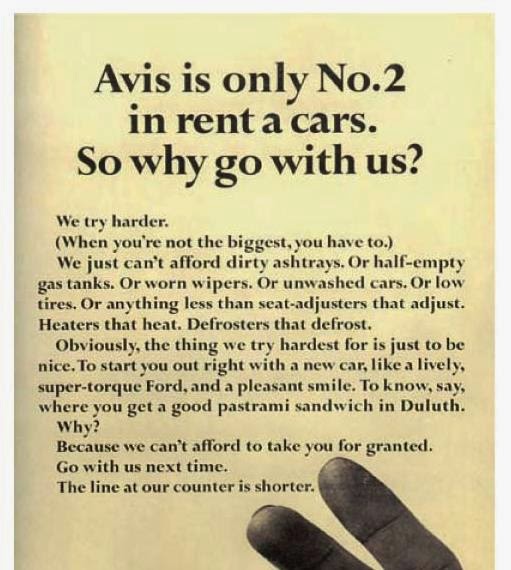 They stood naked to the world. We are not number one. That admission was enough to garner a whole lot of trust. Any company willing to admit something like that so boldly shows that they have nothing to hide.

The Currency they were spending was Reputation and Prestige. They put their reputation and prestige on the line, told everyone their warts, and used it to their advantage. End result? Their market share rose from 10% to 35%!!

Admitting your flaws or shortcomings may seem counter intuitive to getting people to trust you, but in reality, it can be one of your most powerful tools to earning that trust. They say honesty is the best policy, right?


Building trust doesn't cost as much as you think. You just have to spend the right currencies.

PS Patagonia is another example Tom Wanek used in his book. They were a multi-million dollar company when the owner realized his company wasn't lined up with his own personal values of being environmentally conscious. He totally revamped the company and lost a lot of business in the process. But he gained a lot of trust, too. That trust is what led him back from the brink. His customer base basically said, "Anyone willing to take so much heat and so many financial losses to run his company in a way he could be proud is someone I can trust to do what he says he'll do."

PPS You don't need business examples to know this is true. The media and celebrity world give you all the examples you'll ever need. Admit the scandal and people forgive you. Deny the scandal and the storm never blows over.