Putting Amazon and eCommerce Into Perspective

It is about that time of year when you start hearing all the news about Amazon and Wal-Mart and low prices and discounts and the death of mom & pop shop retailers.

But it was only 2.5% of all retail. In fact, if you take gasoline and groceries out of the mix, eCommerce only accounted for 8.8% of all retail dollars last year.  (see references below) 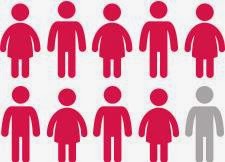 Think about that for a moment. All the hype about Amazon and the Internet, yet over 9 out of every 10 dollars spent in retail were spent in a brick & mortar store. Brick & mortar is so far from dead, that any report you hear otherwise should be discounted immediately.

That somewhere else ought to be you and me. If we quit worrying so much about Amazon and Wal-Mart and the demise of the mom & pops and start focusing on making ourselves better, it will.

PS I used two sources for the numbers you see above. The first source here from emarketer.com claims that all retail was $4.5 trillion. But I felt that number was inflated by things like gasoline purchases and other non-eCommerce retail, so I also used the numbers from the US Census here to get a true product purchase number just over $3 trillion.

PPS And the number from Amazon is their total sales, not just US sales, so their percentage of the US market may be a little bit lower.