Can You Afford to Be a Snob?

This was an actual poster put up in a Borders store that was closing. 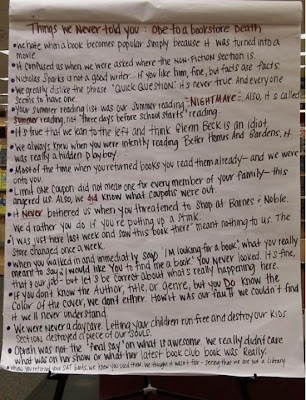 There were three bullet points in there that bothered me (well, okay, the whole thing bothered me, but that's another story).

PS Some of you may be ready to call me out on this since there are certain toys I won't sell, one of them being toys that are tied to a movie. My reasoning is that most of those items aren't toys so much as novelties. If the toy has great play value first, the movie tie-in is wonderful. I have sold a ton of LEGO related to Star Wars, Harry Potter, and now Lord of the Rings/The Hobbit.  First it has to be something I would sell. Then if I get a movie tie-in, an endorsement from Oprah, or the general public falling in love with it - that's a bonus I'm going to run with, not lament.  See the difference?
Posted by Unknown at 9:15 AM