What is Your Story? (Here's Mine) 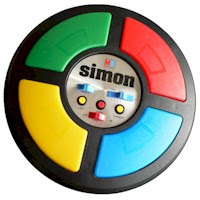 My first official day of work at the Toy House came the day after my 14th birthday. With work permit in hand, I joined the team in November 1980 and took my place behind the glass counter that housed all of our handheld electronic games.
Games like Simon, Coleco Football, Speak & Spell and others.
My parents figured if anyone could explain these games to parents & grandparents, it would be a kid like me. And I was good at it. So good that I could play all the games upside down and backward (that's how they were to me when I showed them to you) better than most of my friends could play them right side up.
What a perfect job - paid $3.35 an hour to play with games!
The hot toy that year was Simon by Milton Bradley. The old Simon with the round black body and four colored lights on top. We owned one at home and I was the champ there, too.
We sold tons of Simon games, as many as they would send us. By early December we were sold out. We started a waiting list in hopes that Milton Bradley would ship some more. They did, but still not enough to meet the demand.
Every day I looked at the empty spot on the shelf where Simon had sat.
The Christmas season flew by fast. It was finally Christmas Eve, my favorite day of the year. We stayed busy until about 3pm when my mom started calling people with big layaways still here. You'd be amazed how many people forget about their layaways until the very last moment.
One guy had completely forgotten and had already gone out and bought a whole bunch of other gifts for the kids. He told my mom to cancel his layaway, he'd be in to get his deposit back after Christmas.
At 4:05pm, less than an hour from closing and too late to try calling people on our waiting list, my mom brought over a Simon game from his canceled layaway and laid it at my feet.
"See if you can sell this before we close," she said.
I turned around a minute later and saw him. He was easily over six feet tall. In retrospect I figure he was in his mid-60's but he felt so much older than that. The look on his face was tired and beaten. His shoulders were slumped in defeat.
He explained to me that he had left Detroit that morning because his six-year-old granddaughter he was raising only wanted one thing for Christmas. He had been to Ann Arbor, Lansing, Grand Rapids, Kalamazoo and Battle Creek but no luck.
The gal in Battle Creek gave him directions to our store saying, "If anyone can help you, Toy House can."
He pointed to the empty spot on the shelf and with a sadness in his voice said, "I suppose you don't have any Simon games either."
There are moments in your life when you know there must be some sort of greater power at work. Call it fate, call it destiny, call it Karma. Call it whatever you want, but I knew instantly I was in one of those moments. I felt it even before I leaned down to pick up the Simon game between my feet.
"Well, today is your lucky day!" I said as I handed him the last of our Simon games.
Thirty years of dust and defeat were shook off in that moment. He started crying, saying "God bless you, God bless you, God bless you." He reached over the counter and gave me a bear hug.
I couldn't help but join him in the moment. With tears now running down my own face we hugged and hugged as though we were long lost relatives. Still he repeated, "God bless you," over and over.
As he left the store, he shouted "Merry Christmas!" to everyone within earshot, and I swear this old man had a dance in his step as he entered the parking lot.
I was fourteen years old at the time. Now I have thirty years of Christmas Eve memories at the Toy House. But none will ever replace that moment in time. I remember the details like it was yesterday.
God bless me?
Believe me, he already has!
Merry Christmas,
-Phil
Posted by Unknown at 12:49 PM